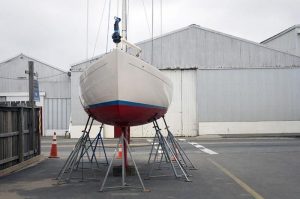 The Martha’s Vineyard Shipyard, a landmark business on the Vineyard Haven waterfront, has submitted an expansive plan to redevelop its boat storage facilities and add a 48-slip marina to the Lagoon side of the property.

A 268-page notice of intent was filed with the Tisbury conservation commission in August. Although the project was immediately referred to the Martha’s Vineyard Commission, no date has been set yet for preliminary planning meetings. The project lies in six overlay coastal and town zoning districts, and must receive permits and approval from nine different local, state and federal agencies before construction could begin.

The owners estimate that process alone will take up to one year.

The proposed $2 to $2.5 million project, coming in the face of both a changing climate and a changing marine industry, would dramatically alter the blueprint and services of the historic boatyard, as businesses in the Island’s only commercial maritime district attempt to adapt to the challenges of rising costs, as well as rising seas.

“We feel we are stewards of the boatyard, and stewards of the working waterfront,” said second-generation owner Phil Hale in an interview this week. “This is definitely the largest investment we have ever made.”

His son James, who is the third Hale generation involved with the company, described a need for environmental adaptation — and with that, increased access to the water.

“We believe as a business with deep maritime history and ties to the community it’s part of our job and goal to get people out on the water, having fun,” the younger Mr. Hale said. “We’re trying to provide a way to build and sustain our business for the future, protect and promote the jobs we have, reinvest in the working waterfront, and add recreational access.”

The shipyard proposal comes at a time of impending change all along the Beach Road corridor, running from the Lagoon Pond drawbridge to the Five Corners intersection. Construction is expected to begin soon on a long-planned state project to re-engineer and widen the road. A bike path connector project from the drawbridge into Oak Bluffs recently got a boost from a state grant. And while no plans have been filed yet, some kind of commercial development project is in the works at the former Hinkley’s Lumber Yard, which came under new ownership last year.

Owned by the Hale family since 1961, the shipyard is one of the oldest continuously operating businesses on Martha’s Vineyard and dates to at least 1856, when it was known as the Holmes Hole Marine Railroad. Over the past century and a half, it has provided a variety of services to recreational boaters, including repair, storage and moorings. It also has a long and storied history as a boat building company, producing vessels for the Navy during World War II and crafting over 100 wood and fiberglass boats since the Hale family took ownership.

Today the business faces threats on both environmental and economic fronts, the Hales said. Straddling the sliver of Beach Road that connects Vineyard Haven with Oak Bluffs, the shipyard has landing ramps on the ocean and the Lagoon side of the road that it uses for boat hauling. With rising seas and the increased prevalence of strong northeast winds perpendicular to the property, the boatyard has experienced regular flooding in recent years and has begun to experience difficulty hauling ships from its ocean-side ramp.

“Vineyard Haven’s exposure to winds out of the northeast is incredibly challenging,” James Hale said. “I often say that the MV Shipyard is one of the worst located boatyards on the East Coast . . . we’re trying to battle with the environmental challenges ahead.”

The redevelopment plan proposes significant modifications to the less vulnerable Lagoon side of the property, including the construction of two new ramps and floating dock systems. The proposal also calls for dredging to clear parts of the access channel and ensure that the docks remain five feet above sea level at low tide. Owners want to use the dredge spoils to raise the grade on the property by 18 inches in an effort to alleviate flooding.

“It will help, but it won’t get them out of the flood zone,” said Lucy Morrison, an administrator with the MVC.

The shipyard currently focuses primarily on boat storage and repair, and the proposed 48-slip marina would add a new commercial enterprise. The Hales said they hope to offer the slips to seasonal and year-round Island residents at market rates as a means to help finance the other aspects of the project. James Hale said that after researching the market, he found that recreational access to the waterfront was becoming harder to find as the Island becomes more developed and built out.

He said while 1,000 homes have been built over the past 10 years, towns have added no new moorings. “We see there’s a real need for access,” he said. “We get calls all the time from people who are looking to buy a boat and ask where they can put it on the Island.”

The plan, like the business itself, is also amphibious, with significant changes to the upland portion of the property accompanying the proposed waterfront developments. The family wants to demolish the two oldest of four storage warehouses, replacing them with 42 parking spaces and a smaller, more easily accessible boat repair building. The new property layout would allow trucks to back into the building in its parking lot rather than off Beach Road, hopefully alleviating traffic, and decreasing the number of curb cuts from four to three, Mr. Hale said.

Overall, the demolition would account for a 15,000-square-foot decrease in storage space, and a net gain of 9,300 square feet of permeable ground cover, according to the plan. The Hales said the plan takes into account the changing boatyard business and modern stormwater management techniques. They also said they hope to maintain the spirit of the town’s working waterfront zoning bylaw that was adopted in the early 1990s.

“This isn’t a millionaire trying to put in a dock,” Mr. Hale said. “This is a working use, for the working waterfront, and that is what we are trying to reinvest in. We feel that this project really fits with town zoning.”

The plan is not without concerns, including from the shellfish community. The shipyard lies in the Lagoon Pond DCPC as well as the Tisbury wetlands district, a region that has become increasingly important to a growing aquaculture industry. The proposal calls for a comprehensive shellfish survey and mitigation plan that includes shifting the dredge footprint to avoid areas where shellfish are found. The plan also states that overnight boaters will not be allowed, and it proposes donating funds for reseeding once dredging is complete.

Phil Hale said his father Thomas bought the business in the early 1960s hoping that it could support his family many generations down the road and function as more than just a service station for vessels from Quitsa to Cape Pogue. At the boatyard’s 150th anniversary in 2006, Phil noted how the business has transformed from service to boat building to repair to storage. But he said the true purpose of the boatyard has remained the same.

“The boatyard exists because of the desire to catch a striped bass off the middle ground, or to experience the joy of rounding West Chop under sail with the wind southwest at 15,” he said at the anniversary. “It is my hope that this boatyard lives on for many generations and has many more stories to tell.”

James Hale is spearheading the development.

When asked how he thought his father would feel about the proposed project, Phil Hale didn’t take long to answer.

“I think he would be thrilled to see the third generation running the business,” he said.