Hale family wants to keep working-waterfront tradition alive and ready for the future.

The Martha’s Vineyard Shipyard is looking to build a 48-slip marina, add new parking spaces, demolish two existing buildings and build a new one, and make other significant improvements to the existing facility on the Lagoon Pond side of Beach Road.

In a conversation with The Times, shipyard owner Philip Hale and his son James said they have been working on designs for the project — which is estimated to cost between $2 million and $2.5 million — for the past nine months, and are looking for support from the town and the community.

The Hale family has owned the shipyard since 1961, and contributed to the working waterfront for three generations. Before that, the shipyard’s roots in Vineyard Haven stretch back 175 years to the 1840s, when it was the Holmes Hole Marine Railway. Today, the shipyard has 27 year-round staff members, 11 of whom are graduates of the Martha’s Vineyard Regional High School, and nine of whom live right in Vineyard Haven.

The shipyard sits on both sides of Beach Road, with access to both Vineyard Haven Harbor and Lagoon Pond. The current site consists of four warehouse buildings used for seasonal storage of vessels, two concrete boat ramps, a seasonal floating dock, a fixed pier, a riprap-armored slope along the shoreline, and dirt and gravel driveways and parking areas. The property is used to seasonally launch and haul vessels, provide boat service to vessels, and store them during the off-season.

The new project, designed by Orleans-based Coastal Engineering, proposes to make extensive improvements to the Lagoon Pond side of the shipyard by installing two piers, two ramps, and two floating dock systems to create the 48-slip marina. The marina will also include two finger floats, an offshore pile to mark a channel entrance and provide an osprey habitat, and “modest redredging” in a previously dredged area around the slips, as well as a 50-foot-wide approach channel, according to the project’s notice of intent (NOI).

The proposed redredging footprint includes the area around the proposed floating docks. The proposed dredge depth is four feet below mean low water (MLW), with a one-foot allowable overdig to five feet below MLW. The floating dock systems would hold 48 vessels with a total area of 5,107 square feet. There is no salt marsh or eelgrass within 100 feet of the project. Dredging and dock installation would be done by barge.

On-land improvements include removal of two existing warehouse buildings, and regrading and constructing a smaller warehouse building and 47 parking spaces, in addition to the 25 spaces already there. The Hales will also install a stormwater management system to manage, treat, and recharge stormwater runoff from the redesigned parking lot.

Wanting to design an energy-efficient new building, the Hales looked into putting solar panels on the proposed building, but found they faced some feathery roadblocks.

“The seagulls drop clamshells on the roof,” Philip Hale said. “We actually did a study of dropping a clamshell on a solar panel, and the clam shell destroyed the solar panel.”

While business has been good, the Hales have always been aware of the harbor’s vulnerability, but the shipyard is facing issues with increased coastal flooding. Flooding is a headache for anyone traveling along Beach Road when it rains, but over the past decade, the Hales have noticed the rate of flooding has increased significantly at the shipyard due to sea level rise. The shipyard is limited in providing public access to Lagoon Pond, because there are only a few dock slips for vessel storage, and minimal onsite parking.

One of the project’s biggest issues is its potential impact on shellfish.

A shellfish survey was completed on the area surrounding the project last March. The dredge footprint in the approach channel was redesigned to avoid certain areas where shellfish were observed. According to the NOI, dredging will improve the shellfish habitat because it will allow for increased water circulation.

The Hales are also proposing to remove shellfish prior to dredging by raking, excluding overnight boaters from using the marina, and donating $2,500 toward a shellfish seeding budget as means of shellfish mitigation.

Tisbury shellfish constable Danielle Ewart told The Times she is aware of the project. “I’m very aware of the project right now, and I’m reviewing it even more closely,” Ewart said. “I’m going to comment on it when it goes to the [Martha’s Vineyard Commission (MVC)].”

Martha’s Vineyard Shellfish Group president Paul Bagnall is also aware of the project. In a conversation with The Times, Bagnall said the Shellfish Group voted to formulate a letter in response to the NOI and send it to the MVC, who is reviewing the project.

“It’s a decision up to Vineyard Haven. My concern is, you don’t want to let water quality slip on the lagoon because the hatcheries serve all six towns on the island,” Bagnall said, adding that the Shellfish Group is keeping an open mind.

The Hales are confident that the mitigation plan within their NOI will protect shellfish and shellfishermen, and make the pond healthier.

“This project is largely about recreational boat access and protecting and preserving the working waterfront,” James Hale said. “That’s really what we think we’ve got here, a plan that’s trying to deal with everything from the vulnerability of Vineyard Haven Harbor, sea level rise, parking, traffic concerns, year-round jobs, recreational access, shellfish, and water quality.”

With a NOI submitted to the Tisbury conservation commission, the project is now in the hands of the Martha’s Vineyard Commission (MVC). The Hales said a preliminary meeting with MVC staff went well, and the next step is to go in front of the Land Use Planning Committee before going in front of the full commission.

“We are from town, we believe in the town, we want to make it work for everybody,” James Hale said.

from the MV Times 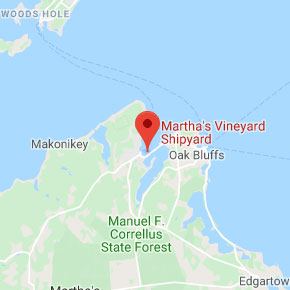